My neighbour from Ghana 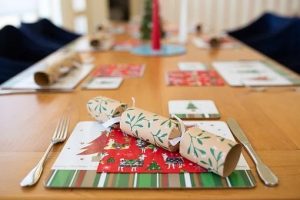 In the apartment below me I have a tenant from Nigeria. We often chat and I have come to regard him almost as part of my family. In Christmas week I asked him whether he would be working on Christmas day, given that he is a Christian. However, he said that he would be off work. I therefore told him that I would be preparing some food for him.

On the day I took him a three course meal. I prepared lasagna, chicken with potatoes and vegetables and a specially decorated dish with different kinds of traditional Maltese Christmas sweets. He was very happy with the meal and I was also happy to know that he would have a good lunch while I went off to eat at my son’s house.

Christmas at my son’s home

My son has been separated for sometime now and is raising his oldest daughter on his own. During all this time however I have kept in regular contact with his ex wife and, although I know that there is not much chance of their coming together again, I made sure they kept in touch and that the children felt comfortable with both parents. She was always welcome at my home but never  visited. Time passed and this woman now has a partner. I had only met him a few times. My son, however decided to invite the couple for Christmas lunch, such is the relationship that he has with his ex-wife.

I was also invited and since I had been self-isolating for so many months, I was a bit hesitant in accepting. However, he was adamant that I would not spend Christmas alone so I accepted and helped him with the menu. We had agreed to eat out on the spacious verandah and try to keep as much distance as possible. My grand-daughter also invited a friend of hers who is an orphan and did not have anyone to share Christmas lunch with. I saw this as an opportunity to love all these people and gladly spent the day with them. At table I was put next to my son’s ex-wife’s partner and I did my utmost to find topics to talk about with him so that he would feel at ease.

I could not believe that I was actually doing this. Could I possibly be so unfeeling so as to accept this outsider and partner of my son’s wife into our family? However, given the type of relationships that  we had built over the years, it seemed like the natural thing to do – to love him simply as another Jesus. After lunch, most of them went out to deliver presents while I offered to stay home and clear up. My granddaughter’s friend offered to help and we found lots to talk about while washing the dishes. For tea we shared lots of sweets that I had prepared and some had actually ordered extra helpings as take-aways. It was a beautiful day where everyone was happy to love and accept the others just as they are.

Four stories of those who “dare to care” every day: because there is no need to wait for World Peace Day to build a more united world. […]