Her smile, her joie de vivre, her commitment towards justice and peace are words that come to mind when one recalls Myriam Dessaivre, 26 years old, who lost her life on Sunday, August 9 in Niger. 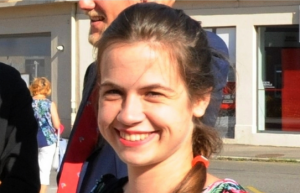 Myriam and five other French youth were killed, together with the Nigerian driver and guide who accompanied them when they were visiting the Kouré giraffe reserve, 60 km southeast of the capital Niamey. These youth were on a humanitarian mission, with the NGO Acted, in a country that faces multiple crises and ranks at the bottom of the human development index.

Myriam, a martyr for peace, obtained a first degree in communication and information at the Catholic Institute of Toulouse and then a Master’s degree in peace studies at the Paris-Dauphine University. She specialized in political conflict resolution and the title of her thesis was: “The Colombian State and the FARC: is reconciliation possible?” She furthered her studies in this field through work in Colombia, Tunisia and Chad.

During a Peace Movement national council meeting held on June 18, 2016, Myriam spoke about the choice of her studies. She was then 21 years old. Today, her strong and meaningful words impress us even more. We quote what she said at the end of her talk: “I have the impression that there is a growth in the number of young people of our generation who want to promote peace.   I think that social networks are contributing towards this, not only through the abandunce of bad news, but also because of the increase in some sort of “global solidarity”. Anger caused by horrible happenings, such as terrorist attacks, wars in the Middle East and famine, is transmitted instantly through social networks, and we are directly affected. We come to the point of asking ourselves: “When do I go there?” So, I’m not surprised that more young people seek professions that engage in work for peace. May be, we are simply looking for the means to live in a better world”.

Myriam learnt more about building this better world through the Focolare spirituality and her commitment as a member of the Focolare Youth Movement. Her father, Jean-Marie, who died in 2014, was a volunteer. Her friend Sophie, who was very upset, said: “She was my best friend. I met her during a Mariapolis in Lourdes, when I was 13. With her, you could have a good laugh about anything”. And she continued to testify: “She had strong convictions and defended the values of peace and justice. Her work was not easy, but she was passionate about it and it fulfilled her. It warms my heart to think that however unfair, terrible and violent her death was, it was not without meaning. She gave her life for what she believed was right.”

Carl, another friend of hers, described Myriam “as a radiant, humble and beautiful person who gave her life to serve life, peace and others”. Speaking about what her death meant to him, he said: “I realize that the message she composed through her life is being delivered to us thanks to her departure to heaven. In one way or another, each one of us gets a daily provision of bad deeds and/or the lack of doing something about them; this is the marytrdom of evil”.

Anne-Marie, a focolarina who knew her said: “Myriam fulfilled her dream, she satisfied her passion by joining her experience to her commitment in this field”.  And she continued: “For the 120 Gen representatives from all over the world, who met for an online congress from August 7 to 14, it was evident that Miriam had to be the precious guardian angel for their Project #Daretocare,  aimed at promoting initiatives on active citizenship in the fields of social justice, politics and economics”. Anne-Marie remarked: “It seems as if now Myriam  is telling us: ‘Move on! Don’t waste time on useless things!”