Margaret Karram is an Arab Christian born in Israel. She received the Mount Zion 2013 prize, together with Yisca Harani, a Jew, for ‘the important contribution to the development of dialogue amongst religions and cultures in the Holy Land and to understanding between Jews, Christians and Muslims’. An interview published by New City Magazine Aug/Sep 2014 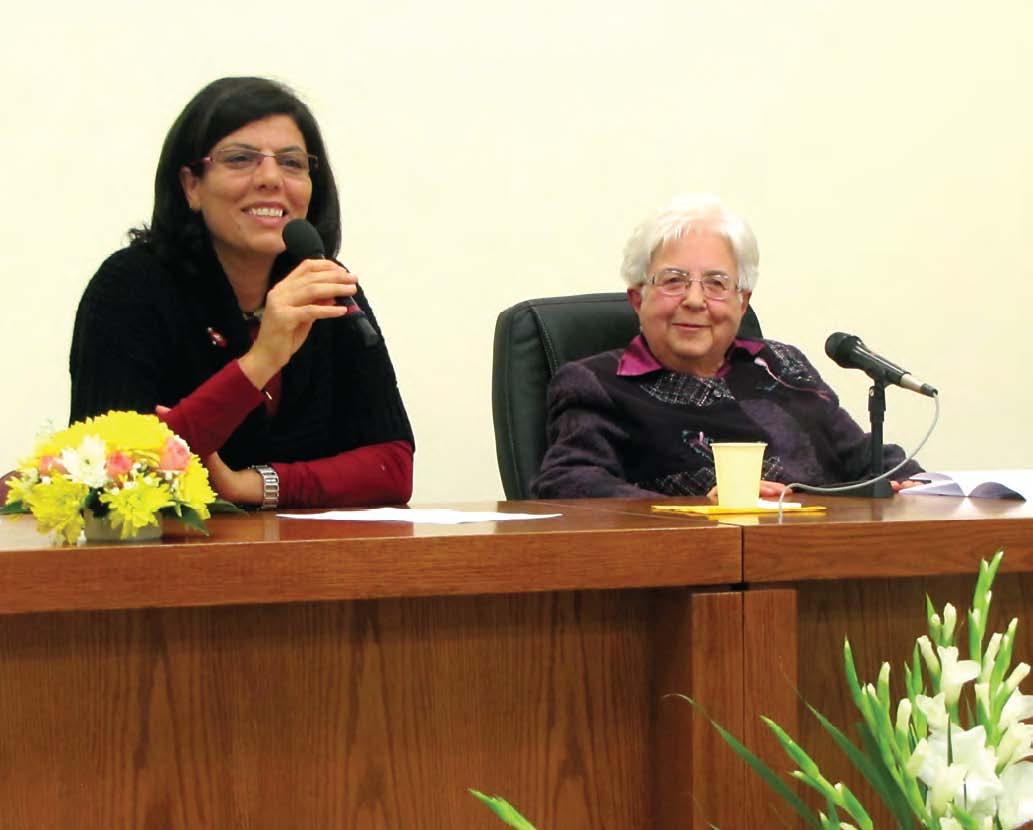 Margaret, a former member of the Episcopal Commission for Interreligious Dialogue of the Assembly of Catholic Bishops of the Holy Land and collaborator with the directorate of the Interreligious Coordinating Council in Israel (ICCI), is now at the International Centre of the Focolare Movement. Margaret Karram was the only female voice at the ‘invocation for peace’ prayer made together by Pope Francis, Patriarch Bartholomew, Shimon Peres and Abu Mazen on 8 June 2014.

What are your impressions of this meeting?

The first impression was that of finding myself in an oasis of peace. I am very aware of the differences which prevent peace, and yet in those two hours spent together praying, it seemed to me that while we were asking God for the gift of peace, he was giving us the way to see ‘from above’, the result of human efforts. The design is obviously not yet complete, but it seemed to me like the embroidery of a rug: on the back are the knots that we must untie, but the one looking at the face of the embroidery is God and he can see the pattern.  While one prayer followed the other in Hebrew and in Arabic I thought to myself: ‘God knows these prayers and understands them. He knows how to act in history.’ I could see the power of prayer and I understood that only God is capable of changing human hearts. Our part is to have the patience of the skilled artisan.  It seems as if your own life story has prepared you to participate in this event?  I have always dreamed of peace.

As children we asked ourselves: ‘Which is my country, where is my place, who am I?’ Now, at fifty, I can’t see that dream of a fatherland any closer, but we have sown the seeds and lots of them! We must continue doing so. It’s our duty to the future generations. We must pass on the certainty of a possible future, without losing hope or giving up because of fatigue. Yesterday was also the feast of Pentecost and the action of the Holy Spirit ‘waters that which is dry, heals that which is wounded and bends that which is inflexible…’.

You were representing the Focolare Movement with a personal invitation from Pope Francis.

Many people from the Focolare, including the President, Maria Voce, together with my friends in Bethlehem and Jerusalem assured me of their support. I heard many joyful words from Christian, Jewish and Muslim dignitaries whom I met in the Vatican Gardens. I had the impression that the Pope gave us a new encouragement to commit ourselves to peace with greater courage. I felt it also urged us as members of the Focolare Movement to be more present, more active, more courageous actors in undoing the ‘knots’ that we find everywhere. The Pope’s personal greeting confirmed this for me, as did other authorities I met.

You were the only woman to read a prayer. How did that feel?

I tried to read that prayer as a representative of humanity that believes, suffers and hopes. As women we have an important role to play for peace. One of the participants said to me: ‘It is so important that you are here.  I know the rich contribution a woman can make!’ As we listened to those beautiful prayers and music I recalled the words of the Pope at the Angelus, just a few hours before: Mother Church and Mother Mary are ‘both mothers, both women’. And in a situation where there is so often a lack of harmony you feel the need of a mother.

How do the people you know in the Holy Land see all of this?

There were great expectations and now there is great hope. Obviously there will always be sceptics. Both Palestinians and Israelis say that this meeting marked a turning point that we can look to from now on and continue to do so in the future. As well as that, it was a strong sign that the Church takes on board the sufferings and hopes of all peoples. And it was a demonstration that the Holy Land has not been forgotten and that the Pope does not leave these two peoples by themselves and will walk alongside them.  The event must be seen in the long term. In the meantime we must continue to weave, to untie the knots and commit ourselves at all levels with courage and tact. Many think there is a long road ahead, but we really don’t know how God acts in history.  There is always hope.