“Lord, how many times shall I forgive my brother or sister who sins against me? Up to seven times?” (Mt. 18:21) 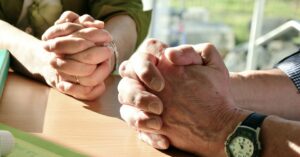 Chapter 18 of Matthew’s Gospel is a very rich text in which Jesus gives instructions to the disciples regarding how to live out  relationships within their newborn community. Peter’s question refers back to what  Jesus had said  a little earlier: “If your brother or sister sins against you…”.[i]  As Jesus is speaking, Peter interrupts him as if he realises that he has not fully understood what his Master has just said. He asks Jesus a question that is very relevant to understanding the pathway that  Jesus’ disciples should follow. How many times must we forgive?

Questioning is part of the journey of faith. Those who believe do not have all the answers, but remain faithful despite the questions. Peter is not asking about sin against God, but rather about what to do when a member of the community commits a sin against another. He thinks he is a good disciple who can forgive up to seven times. [ii] He does not expect such an immediate response from Jesus and this shakes his confidence:  “I tell you, not seven times, but seventy-seven times.” (Mt. 18: 22). The disciples were familiar with the words of Lamech,  the bloodthirsty son of Cain, who sings of the repetition of vengeance seventy times seven. [iii]   Jesus, alluding to this very statement, contrasts unlimited vengeance with infinite forgiveness.

It is not a question of forgiving a person who continually offends, but rather of always having an attitude of forgiveness in our hearts. True forgiveness, the kind that makes us feel free, usually comes in stages. It is not a feeling, it is not forgetting: it is the choice that the believer should make, not only when the offence is repeated, but also every time it comes to mind. This is why it is necessary to forgive seventy times seven.

Chiara Lubich writes: “Jesus …  above all, was thinking about the relationships among Christians, among members of the same community.  Therefore, first of all, we are called to behave in this way with our brothers and sisters in  faith – in the family, at work, at school or in our communities if we are involved. You know how people often want to react to or “pay back” an  offence with a negative action or remark.  You know how differences of character or impatience, or other causes, can lead to a lack of love among people who live together. Well, remember that only a constant attitude of forgiveness, renewed each day, can maintain peace and unity among neighbours. We will always have a tendency to think about the faults of our brothers and sisters, to remember their past and want them to be different from the way  they are… We need to acquire the habit of seeing them with new eyes and as new people and show them total acceptance even if they are not sorry for what they have done.”[iv]

We are all part of a community of people who are ‘forgiven’ because forgiveness is a gift from God which we always need.  We should be amazed by the immensity of the Father’s mercy:  he forgives us if we also forgive our brothers and sisters. [v] There are situations in which it is not easy to forgive, situations that arise from political, social and economic conditions in which forgiveness can take on a communitarian dimension. There are many examples of women and men who have managed to forgive even in the most difficult contexts, helped by the community that has supported them.

Osvaldo is Colombian. He received death threats and he saw his own brother being  killed. Today he is the head of a farmers’ association, where he works to rehabilitate people who have been directly involved in his country’s armed conflict. “It would have been easy to respond to revenge with more violence, but I said no,” explains Osvaldo. “Learning the art of forgiveness is very, very difficult, but weapons and war are never an option for transforming lives. The road to transformation is another. It is being able to touch the human soul in another other person, and to do this you don’t need pride or power: you need humility, which is the most difficult virtue to acquire.”[vi]

Listen to the Word of Life