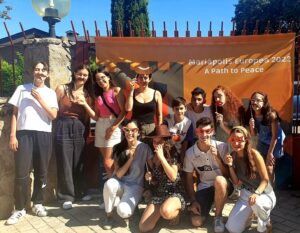 The European Mariapolis 2022 was held from 24 to 28 July. The event, entitled A Path to Peace, was held at the Mariapolis Luminosa Centre (Las Rozas de Madrid) and brought together almost 200 participants, with a high percentage of young people and representatives from different European countries: Great Britain, Germany, Holland, Belgium, Malta, Portugal, Italy and, of course, Spain.

Some online connections made it possible to welcome in the auditorium, virtually, but with warmth and participation, other contemporary Mariapolis in Portugal, Italy, and Slovakia, where was present a large group of refugees from Ukraine.

The aim of this Mariapolis has been to strengthen the links between the different peoples of Europe, starting from the citizens and civil society, in order to make a real contribution to the fraternity of the continent and to peace.

A series of round tables, dialogue, workshops, sharing of testimonies, trips, and musical and recreational moments, took us all on an inner journey, building relationships of Peace with the help of the great Spanish mystics: St. Teresa of Jesus and St. John of the Cross, as well as Chiara Lubich, founder of the Focolare Movement. The title of the Mariapolis was “Journeying from the Inner Castle to the Exterior Castle”. The Archbishop of Madrid, Carlos Osoro, said after his time spent in the Mariapolis that this motto is “revolutionized by the putting the Gospel into practice”. The inner spiritual life is defined by St. Therese as the Inner Castle. The experience the mystics bring to us is that God dwells within us and in our midst. Chiara Lubich said in one of her meditations: “Here is the great attraction of modern times: to penetrate to the highest contemplation while mingling with everyone, one person alongside others”. Chiara refers to this as the Exterior Castle.

“Look how they love each other…”, is the expression that best reflects the experience of these days, as is said of the first Christian communities,” commented a young man from Oviedo, recently ordained deacon. And then he added: “I have been convinced, through concrete, everyday events, that this has nothing to do with the running of a company, but with the life of a family”.

The testimonies gave a strong ecumenical dimension, such as that of Wim and Elma from the Evangelical Church in Holland; also inter-religious openness through Mardía, a Sufi Muslim, accompanied by her family; the concrete commitment to an integral ecology; the responsibility to build a United Europe evidenced by the Project Europe underway in Brussels with the collaboration of people from Eastern and Western Europe, a journey also highly appreciated by Luis Manuel Romero, Director of the Episcopal Commission for the Laity, Family, and Life of the EEC.

The video of Dr M. A. Shomali, Director and founder of the International Institute of Islamic Studies in Qom (Iran), summed up the meeting as having been a multi-coloured mosaic that filled all those present with hope: “Each one of us is like a tile, which together with others builds universal peace. May God be with you!”