This is the question we asked  Prof. Alberto Lo Presti and Dr Elena Merli, members  of the Igino Giordani Centre, editors of “Igino Giordani: an unarmed hero” (Città Nuova Publications). 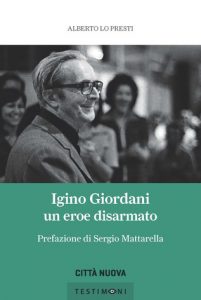 So many biographies have been written about Igino Giordani. Why another one?

Elena Merli: The previous biographies cover a limited time span of Giordani’s life. The first biography was written in 1936; then there was the one written by Tommaso Sorgi, a friend of Giordani who studied him in great depth. Sorgi wrote an inspired and detailed biography that deals with Giordani’s life from birth to 1948. Other biographies analysed  Giordani’s life from a particular perspective: historical, spiritual, political…. They are all valuable; they are a great richness, but this biography deals with a holistic perspective of his life. It speaks about aspects that were very little explored until now, namely: his family life, his deep relationship with Chiara,  the  particular period of intense illumination that was “Paradise ’49”. Even his experience as a member of the Dominican Third Order had not yet been explored in depth. Some of the political background of his life had not yet emerged, nor were some of his intimate choices and delicate passages of his personal life. I would like to point out particularly the novelty of a chapter dedicated to what he jokingly called “Giordania”, that is, his family. I think many will enjoy reading about the secrets of Igino’s lively family situation.

The first thing that strikes you in this book is its prestigious preface signed by Sergio Mattarella, the President of the Italian Republic. Why him?

Alberto Lo Presti: It is good to know a few things from behind-the-scenes. First of all, Sergio Mattarella knew Igino Giordani personally, and he says something about this in the preface. Then, one must remember that his father, Bernardo Mattarella was the author of the first biography written in 1936. So, all this helped to ask him  write the preface.

Then, we think that Sergio Mattarella is interpreting the role of President of the Republic as a source of unity in Italy and in the international field. During this  health crisis, he has been a figure of stability and high morality.

Giordani gave  witness to unity in politics and harmony among people. The parts of the book dedicated to his political commitment describe his behaviour during the war and in the post-war period, under bombings and fascism, amidst the rubble of reconstruction and social distress. Those times were not any calmer or more peaceful than the ones of today. Giordani’s steadfastness can still help us to understand where to go today.

This volume is the result of intense archival research work. Do we know everything about Giordani now?

Elena Merli: We have an impressive amount of material, documents, correspondence, and also audio and video recordings of many of Giordani’s talks, public and confidential ones, transcribed and sorted out. All these proved extremely useful to discover details about his personal life.

Who knows how many more new and interesting discoveries we can still make by exploring the archive! Many are already in this book. I’ll mention just one: details about Giordani’s last years, when he lived in this building, the International Centre of the Focolare Movement. At that time, the Focolare community of Antonio Petrilli occupied the first floor of this building, and in 1974, after the death of his wife Mya, Giordani moved to live with this community. These unpublished details reveal Igino’s faithfulness to community life and the depth of his humanity.

To whom is this book addressed?

Alberto Lo Presti: It addresses all those who want to solve the mystery of mysteries, that is, of how to be totally donated to God while immersed in the ordinary things of the world.

Giordani managed to do this and he traced the way for us. He always questioned himself about it ….. but when he met Chiara Lubich he also found the answers. For Igino, Chiara was the answer to all his existential questions. He studied early Christian writers, medieval theologians, modern theologians, great spiritual figures, yet he found the answers in Chiara and in the spirituality of communion.

I would like to recount one of the many anecdotes, which many do not know; one can find it in the book.

Giordani had such a great desire to donate himself to God that at the end of the 1920’s he joined the Dominican Third Order. But he was not satisfied … the rule for members was at least one Mass a month, a sermon by one of the monks and nothing more. He wanted to be more involved in religious life. So he submitted his idea to the monks: rent a flat where they could all meet: “you in your cassock (the monks’ cassock) and we, (the lay members) in our trousers. Thus, we can have some community life together”. He was told that this was not in the norms of the Dominican order and it stopped at that. What Giordani yearned for at the end of the 1920’s became a realty through Chiara; it was the focolare. Yes, in 1928 when such episodes happened, he was dreaming of the focolare. Incredible, isn’t it?