At the heart of the meditations, the reflections, and the communion in this third and final day of the spiritual retreat of the General Assembly, is the icon of the Most Blessed Trinity. This was presented as the model of a “collective holiness” by Maria Voce and as relationships of love that bring out the “design of God” on every person by Claudio Guerrieri.

It wasn’t by chance that the ecumenical prayer at the beginning of the day was prepared by Christians from two Orthodox Churches, whose traditions include a huge treasure of reflections and contemplation of the Blessed Trinity. 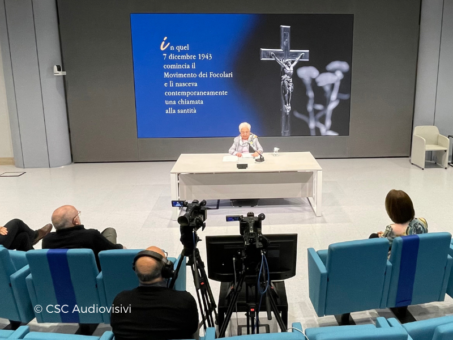 In her meditation, Maria Voce, who will soon be leaving her role as President of the Focolare, once more drew our attention to the general aim of the Movement: “the perfection in love”, as Chiara Lubich wrote. This means complete personal fulfillment through the giving of oneself to others; or using a more conventional expression it could be defined as holiness. But a holiness -as Maria Voce underlines- that is typical of the Focolare: a “Collective holiness”.

In order to explain this concept, the President retold the story of the beginning of the Movement where we saw Chiara with her first friends living the Gospel in a radical way. It was a life “for God and for the others -as Chiara herself explained – in a total forgetfulness of ourselves and of everything that could have made us fall into withdrawing into ourselves”. And so, a way to a new holiness was born, “both radical and light, a holiness that could be open to everyone, and could be achieved in the family, in the midst of the world, together”, a holiness in company with others. This is a holiness that always asks for a personal listening to what God wants but, to do this knowing that one is travelling with others, in fact looking at the other and the presence of God in him or her. 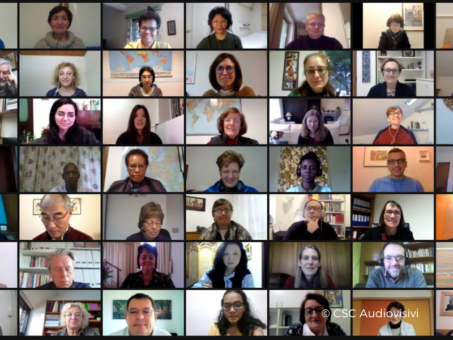 The Italian philosopher, Claudio Guerrieri, member of the study center of the Focolare, the Abba School, continued these reflections, focusing on one of the effects of the “collective holiness”: what emerges from this is the true personality of each one, the plan or design of God on each person. This is an aspect that is very present in the mystical writings of Chiara Lubich from 1949/1950 which offer a model of communion and of unity, “not as uniformity, but that includes a plurality of voices in which each one, as a part, expresses the whole.” This can be seen by the fact that in the Focolare Movement, as well as Chiara Lubich, also two co-founders are present, Igino Giordani and Pasquale Foresi, who through their “designs” the charism of Chiara was opened up and became incarnate.

So, these three days of deep retreat have drawn to a close, at times maybe it was also a bit unsettling but full of ideas also for the decisions that have to develop. As one of the young people described in the final session of communion: “It’s been a moment for listening to one another and for trying to understand in what direction the Holy Spirit is calling the Focolare in this future period, and to whom to entrust the tasks for taking ahead this Work (of Mary) with the challenges and the opportunities that the next six years will present.”