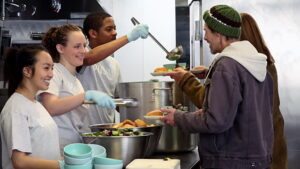 The Word of Life for the this month is taken from the first chapter of the prophet Isaiah. This sentence was chosen for the Week of Prayer for Christian Unity, which is celebrated throughout the northern hemisphere from 18 – 25 January. The texts were prepared by a group of Christians from Minnesota, USA.1 The subject of justice is a hot topic. Inequality, violence and prejudice grow within a society that struggles to witness to a culture of peace and unity.

And Isaiah’s times were not so different from ours. Wars, rebellions, the pursuit of wealth, power, idolatry and the marginalisation of the poor had led the people of Israel astray. The prophet uses harsh words to call his people back to a path of conversion and points the way to a return to the original spirit of the covenant God made with Abraham.

What does it mean to learn to do good? It means that we need to be open to the idea of learning and that requires effort on our part. Each day, there is always something to understand or something to improve: we can always start again if we have made a mistake.

What does it mean to seek justice? This is a treasure that we should desire and search for as the goal of our actions. Practising justice helps us learn to do good because it means we better understand the will of God, which is our good. Isaiah offers concrete examples. The people most preferred by God are the helpless, the oppressed, the orphans and the widows because they are the most defenceless. God invites his people to take practical care of others, especially those who are unable to assert their rights. Religious practices, rites, sacrifices and prayers are not pleasing to him if they are not matched by the pursuit and practice of goodness and justice.

This Word of Life urges us to support others, to have a watchful eye and practically help those in need. Our journey of conversion requires us to open our hearts, minds and arms to others, especially towards those who suffer.

“The desire and the search for justice have always been inscribed in the human conscience. God himself put them in our hearts. But despite the conquests and progress made throughout history, how distant we are from fulfilling God’s plan! The wars that are still being fought today, as well as terrorism and ethnic conflicts, are the sign of social and economic inequalities, injustices, hatred… Without love and respect for the individual and attention to his or her situation, personal relationships may be correct, but they can also become bureaucratic and incapable of providing decisive answers to human requirements.
Without love there will never be true justice, goods will never be shared between rich and poor, and there will never be attention to the life and specific needs of each man and woman.’ (2)

To live for a united world means taking upon ourselves the wounds of humanity and carrying out small gestures that can help build up the human family.

One day, J. from Argentina bumped into the headmaster of the institute where he had taught and who had used an excuse to force him to leave his job. When the headmaster recognised him, he tried to move away but J. went towards him. He asked him for news and the headmaster told him about his difficulties, that he lived in another city and was looking for work. J. offered to help him and the next day he spread the news among his acquaintances that he was looking for a job for someone. The response was not long in coming. When the headmaster received the news of an offer for a new job, he could
hardly believe his ears! He accepted the job, deeply grateful and moved that the very person he had once fired had taken a real interest in him.

J. then received the ‘hundredfold’ because, at the same time, he was offered two jobs that he had always wanted since he started university. He too was amazed and touched by this practical love of God.

by Patrizia Mazzola and the Word of Life team

1 In 2020, in Minneapolis, Minnesota, George Floyd was murdered. This murder started a movement for the elimination of all forms of racial discrimination.
2 C. Lubich, Word of Life Nov 2006

May Word of Life