The World Council of Churches (WCC) hosted Focolare president Margaret Karram and co-president Jesús Moran, as well as other members of the Focolare community, on 28 November, offering a guided tour of the Ecumenical Centre, and discussing unity, reconciliation, inter-religious bridge-building, Faith and Order, and communications, among other issues of interest. 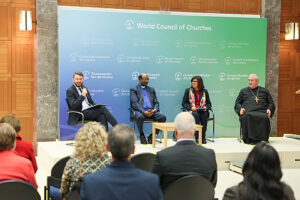 WCC acting General Secretary Rev. Prof. Dr Ioan Sauca expressed appreciation for the many past collaborations between the WCC and the Focolare, most recently the Focolare’s participation at the WCC 11th Assembly in Karlsruhe.

Sauca said the WCC recognizes the importance of cooperation and mutual support between the WCC and the Focolare to serve together under the new paradigm of the pilgrimage of justice, reconciliation, and unity.

“Christians of different churches belonging to Focolare have been part of delegations of their respective churches and in other capacities at WCC assemblies,” noted Sauca, who summarized a long history of cooperation between the two groups.

“Your commitment to promoting the dialogue between Christians, Jews, and Muslims as well as your engagement in a sustained dialogue between Israelis and Palestinians are inspiring assets for the worldwide movement of Focolare and beyond,” said Sauca.

Staff from the WCC and representatives from the Focolare Movement also discussed past and future areas of collaboration, and shared their experiences related to unity and ecumenism. 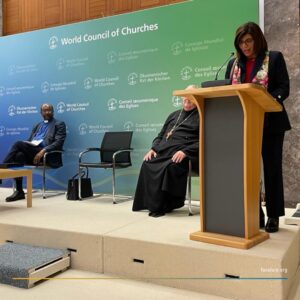 “Twenty years ago, Chiara Lubich, founder of the Focolare Movement, came here at the invitation of the then-General Secretary Konrad Raiser and Prof. Ioan Sauca,” said Karram. “I am very grateful to be with you all here today to commemorate this anniversary. I give praise to God because I am aware I am walking on ground that I hold sacred.”

Rev. Prof. Dr Jerry Pillay WCC General Secretary-elect, commended the many ways in which the Focolare community and the WCC have exchanged ideas and insights over the years. “Our collaboration has been on different levels,” he said.

Photo gallery on the Focolare leadership visit to the WCC

Chiara Lubich: Where there is love and charity, there is God

The Week of Prayer for Christian Unity is celebrated from 18-21 January in the northern hemisphere. In an interview with Bavarian TV in 1988 in Montet (Switzerland), Chiara Lubich spoke specifically about how to make progress on the path to Christian unity. […]

11th Assembly of WCC: Dialogue as a lifestyle

The eleventh Assembly of the World Council of Churches runs from 31 August to 8 September 2022 in Karlsruhe, Germany. The Focolare Movement has long been linked to the WCC by ties of friendship and collaboration, which continue in this latest Assembly. […]

Synodality may not be a word that trips easily off the tongue of many Christians. Nonetheless the Catholic Church’s synodal process is proving timely for people of many different traditions. […]