The volume of Words of Life is more than a commentary on the gospel message, it is a charismatic reading, an intuition, and an invitation to put the words of Scripture into practice in everyday life. It is part of a series of 13 books. 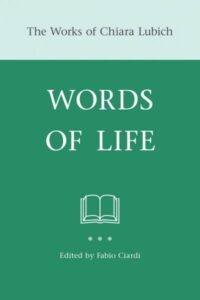 The Works of Chiara Lubich – part 5

This book entitled, Words of Life, is unique in that it contains a complete compilation of Chiara Lubich’s written commentaries on Scriptural passages. These constitute what could be called a separate work within her extensive literary production. Being destined to reach a large audience, they were always printed as simple leaflets and were written in a style that would be understandable by people of every social class.
However, they are more than simple commentaries on the Gospel. They are charismatic readings, intuitions and flashes of inspiration and unexpected joy. They provide a decisive impetus to help people start living the Gospel. Chiara Lubich’s immediate, incisive and direct style created a new literary genre. In its simplicity, the Word of Life initiative made a significant contribution to the rediscovery of the ‘word of God’ in the twentieth century, first in the Catholic world and then among Christians worldwide.

The edition edited here by Fabio Ciardi collects these Words of Life (about 350 in total), which cover a period of more than 60 years, from the early beginnings of the evangelical experience of the Focolare Movement’s founder (the first commentary dates back to 1943) until 2006. They have been translated into 96 different languages.

The destiny of the Word is ‘to be “eaten” in order to give life to Christ in us and to Christ among us.’ The Word is much more than food. It is like the air we breathe, without which we cannot live. Chiara writes of the experience at the beginning of the Movement: